Over 85% of golfers improperly cross the target line at the point of impact during their shot, resulting in pulls, slices and poor distance. Most golfers follow-through by aiming straight down the target line instead of swinging the club outward over the target line — they are NOT swinging on-plane.

When it comes to important golf swing fundamentals, swinging on-plane, in my view, is one of the top two (proper Release is the other).  A Swing Plane is the angle that the shaft of the club travels around the body during a golf swing.  Learning how to swing on-plane will dramatically change the way you hit the ball and how you score.

First let’s talk about the three possible plane positions you’ll encounter on your backswing that impact whether or not you will  properly swing on-plane: #1…you’re too steep, #2 you’re too shallow, and #3 you’re on-plane.

In discussing and teaching how to swing on-plane, you need to understand the Target Line.  This is the visual line that goes through the ball and continues through to whatever you’re aiming at…such as the pin on the green. 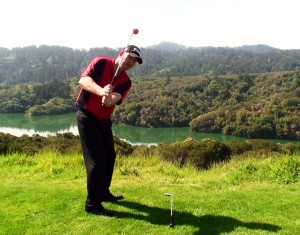 If you’re backswing position looks like this, with the butt end of the grip pointing between the target line and your feet (or at your feet)…you’re too steep.

Note: There are many golfers, including touring pros, that make a steep backswing and that’s fine.  The truth of the matter is the backswing is highly over-rated – it can take many forms.  But…don’t get too excited thinking that over-rated means easier.  The down swing (through swing) is very precise and virtually all great golfers and pros look identical at the point of impact with the ball because they are on-plane.

But for this discussion, we’re talking about a basic, neutral golf swing, which is a good starting point to learn and practice from. 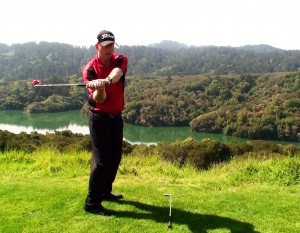 If on your  backswing, you find that the butt end of the grip points out past the target line, possibly to the horizon.. you’re too shallow.

And finally, let’s look at plane position #3… you’re on plane

When you take a backswing, the point when your left arm is at or near parallel to the ground, that is when the butt end of the grip should point at or near the target line.  Learning how to achieve this in your swing is a real game changer.

Using the InsideMove swing tool will help you visualize the target line and swing your club on-plane.

See the video below for further instruction on swinging on-plane.

That’s it for now.  Stay tuned for more on swinging on-plane and the other swing fundamental — the release.

What Are the Two Most Elusive Golf Swing Fundamentals?